The recent regulation of the digital signature.

The recent regulation of the Digital Signature Law is welcome (the LFD), within the framework of the Plan for the Modernization of the State and the Simplification and Debureaucratization of the Public Administration. This new regulation, renders the previous regulatory decree without effect (2628/200), gathering the experience in the implementation of the digital signature over the almost 18 years counted from the sanction of the LFD in the year 2001 (Law 25.506). To put it in context, in the year of the sanction of the LFD, only the 10% of the Argentine population had internet access, today instead, said access is on the order of 70% according to ECLAC data.

Let us remember that after the sanction of the LFD, the digital signature was incorporated by the CCyCN establishing: “On electronically generated instruments, the requirement for a person's signature is satisfied if a digital signature is used, that undoubtedly ensures the authorship and integrity of the instrument” (art. 288). further, the CCyCN also provided for contracts concluded remotely, including those celebrated through electronic means (art. 1105).

The digital signature means that expression of will that has a digital certificate (the "Digital certificate”) by which it can be verified in an indubitable way: (i) the authorship of the signature; Y (ii) the authenticity or integrity of the digitally signed document. The Digital Certificate is a fundamental part of the computerized process for creating the digital signature and is issued by the Ministry of Modernization or some other agency that was authorized by the LFD Application Authority..

The news of the regulatory Decree

By virtue of the aforementioned new regulations to the LFD, the following additions stand out:

It seems important to me to conclude with the following general comments:

(ii) the digital signature of the documents with the extension “.pdf” It is done by entering a username and personal password on the web platform of the Ministry of Modernization. Additionally, To sign and verify the documents, some files must be installed that are available in the Ministry of Modernization and also configure the Adobe Reader DC, so it is recommended that users have knowledge of said software;

(iii) the digital signature is heading globally as the standard that keeps up with the various technological changes and speed in today's transactions, electronic commerce and relations with the Public Administration, generating cost savings over time, on paper and in storage facilities, to name a few;

(iv) requires attorneys and clients to understand the basics of the underlying technology, namely, cryptography, the digital signature creation process and the relevance of this technology, in order to avoid errors that may result in the ineffectiveness of the intended digital signature and its consequent legal invalidity; Y

(v) the implementation of the digital signature as we said above has almost 18 years but has not reached maturity yet. Said in other words, the technological platforms of the different State departments still have to adapt and converge to achieve interoperability of electronic documents and digital signatures, for example, even with the Bar Associations at the time of the legalizations that are required in the General Inspection of Justice for certain procedures.

"Use it, nothing happens..." By Fernando Varela 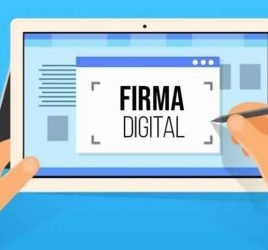 The Binational Entity Yacyretá signed with the firm Voith Hydro Ltda. the contract for the provision of electromechanical equipment for the new complex of Aña Cua.